Learn Why Pro Photographers are Turning to PDF for 360 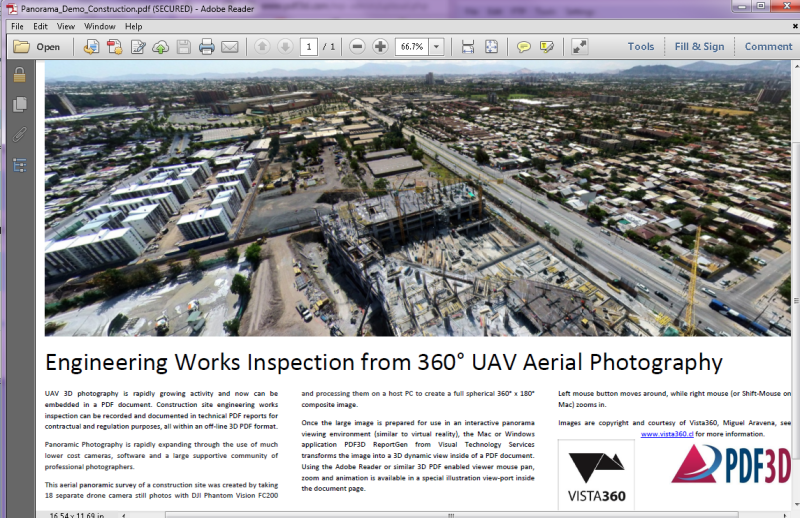 Learn Why Pro Photographers are Turning to PDF for 360

There’s been a notable surge in interest from professional photographers turning to the PDF format – in particular, 3D PDF, over the past few months. What has predominantly been favoured by CAD designers, engineers, scientists and manufacturers over the past few years is now fast becoming a favoured format for those working with photography. But why now? Why the sudden interest?

As panoramic 360 photography has seeped into the mainstream, and stitched photographs can now be taken on the majority of new mobile devices with ease, people everywhere are expecting much more from photography – from a commercial and personal perspective.

VR is now big news and people now expect walk-throughs and immersive images that can be viewed from multiple angles for an all-round, spherical experience.

For the professional photographer, this has affected many aspects of the day job, especially workflow. There are now more steps in the process, from capture to production, and many of the traditional tools are falling short, adding hours to a photographer’s already long day.

In a commercial setting, photographers employed for surveys, reconstructions and inspections of sites and machines, for example, need to be able to capture multiple views and then share those photographs with a team of people for feedback, mark-ups and action recommendations.

As photography has become more sophisticated, the file sizes of these images have grown significantly. It’s the reason why many are using online streaming for viewing but this comes with limitations – especially if recipients want to view images offline or combine into a document. If you or others want to store that image outside of a cloud server, options are again limited.

Sharing by email is another option of course, but images are too large and the panoramic viewing environment gets lost.

The critical stumbling block is at presentation stage, and this is where PDF has stepped up to the mark.

3D PDF cuts through these issues – creating an altogether different image presentation vehicle. The 360 panoramic shot can now be packaged directly into an offline document file, opened up locally and still get the full spherical image viewing experience.

Using a PDF conversion tool, such as Reportgen, the 360-degree image can be taken directly from the camera, via the JPEG image file, and embedded into a PDF. The behind the scenes tech takes care of recasting into an offline document without losing the critical 360-degree interactive navigation visual presentation.

If you think this “JPEG to PDF” is boring old news, think again. The technical work going on in the back-end of this tool is brand new and exceptionally powerful. Borrowing from technology normally used for 3D aerospace engineering, don’t underestimate the advantage of this level of 3D image-texture optimization for sharp, high resolution images at an optimal file size.

It goes further, too. By displaying the stitched or panoramic spherical photo in a 3D PDF, you get further viewing features such as zoom, rotation, and panning animation.

The power of mark-ups for faster decisions

There is another feature, however, that is proving to be popular among pro photographers working in a commercial environment that requires project feedback. The mark-up capabilities of PDF are well known and loved – but when they can be used to add comment to a 360 image, the workflow simply works better – and faster.

In essence, PDF is streamlining image sharing and presentation for professional photographers, and with tools like PDF3D ReportGen, it’s doing that at a click of a button.

When Panoramic PDF comes into focus

This Panoramic 360 PDF solution is best for single shot, single image per PDF, with typical 360 camera resolution packaged in a brochure or glossy report format. Today with the typical Adobe Reader viewing tools, leave out gigapixel, 360 videos or more than a dozen images per PDF to achieve the best results.