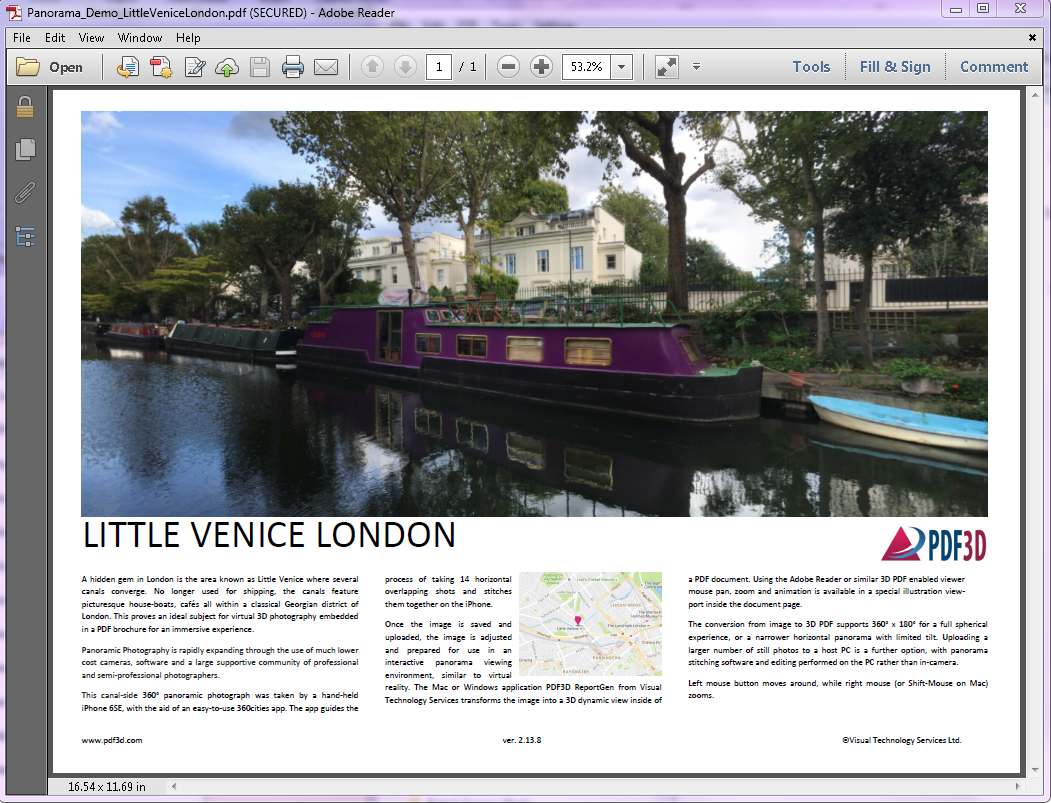 PDF3D Version 2.16 is here and brings with it a host of new and updated 3D PDF conversion features to support and enhance 3D visualization and panoramic 360 photography.

July 17, 2018 – London: PDF3D have released their latest update (v2.16) of their suite of 3D PDF conversion tools in. In this powerful release, the team have developed industry leading technology to transform how 360-degree panoramic photos are presented and shared, using 3D PDF both on and offline.

From Archeology to Forensics, capturing environments with full 3D color is enabled by a vast range of new sensors, cameras and processing algorithms.

As the range and resolution of image capture devices has grown so have the size and complexity of the data files generated, and many working in those industries that rely on this detailed imagery need a workable solution to allow for the practical communication, sharing and long-term archiving of the outputs from these technologies.

PDF3D has been supporting photographers, investigators, surveyors and many other professionals working with 3D visualization for many years with its range of 3D PDF tools, helping to meet their needs by providing a secure, compressed, standards-based format for delivering their detailed imagery.

The company’s latest release, v 2.16, has dedicated major effort to develop functionality for users of panoramic 360 photography, in response to the many users around the world who work with 360 photography and panoramic drone, laser and scanner imagery.

“Direct capture of 360-degree panoramic images is now available in devices ranging from smart phones and hand-held stick devices, through to professional digital photography gear, so our developers wanted to develop a quick but powerful 3D PDF conversion for images of this type,” explained Ian Curington, CEO at PDF3D. “We’ve really gone all out, working on the power and functionality for panoramic 360 photos available in v2.16 to take the processing and display of this kind of image capture to another level.”

While the entire suite has been updated, PDF3D’s leading 3D PDF generation tool, ReportGen, has had major developments to support direct photo to PDF conversions, with full spherical in-document navigation. Other key features include:

You can learn more about the new features and how photographers are already using PDF3D’s tools to generate their own sophisticated content at Panoramic 360 feature page https://www.pdf3d.com/panoramic-360-in-3d-pdf-features/

Version 2.16 can now be downloaded via Quick Request at www.pdf3d.com

PDF3D ( www.pdf3d.com ) based in the United Kingdom, produce a suite of widely respected software products and plugins for engineers, scientists and developers who need to communicate complex data and 3D models to others in the universally accessible PDF format. PDF3D’s technology provides the fastest and easiest-to-use, highly compressed 3D PDF conversion available for an ever-increasing range of formats and tools. From 3D CAD to GIS, DWG and LIDAR, PDF3D works closely with users and programmers within the engineering, geospatial, geology, aerospace, architecture, medical and product packaging communities worldwide.