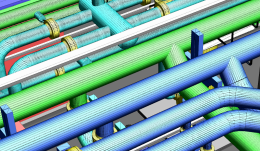 PDF3D®, the flagship brand of Visual Technology Services, has released version 2.8.0 of its 3D PDF product suite with new features to assist engineers and scientists with technical reporting and 3D modeling.

London, UK, August 21th, 2013 – Driven by the technical needs of the scientific and engineering communities, the latest PDF3D® 2.8.0 release from Visual Technology Services enhances and adds new features to the 3D PDF family of products with specific focus on 3D reporting.

“We have been working closely with earth science users and engineers over the past few months to create solutions that enable the easy communication of complex technical data to remote teams. Many new features have already been welcomed by scientists and we’re delighted with the feedback so far,” said Ian Curington of PDF3D.

Scientists, engineers and developers interested in learning more about the new release can visit the website at www.pdf3d.com. PDF3D Version 2.8.0 is available immediately for trial or purchase.