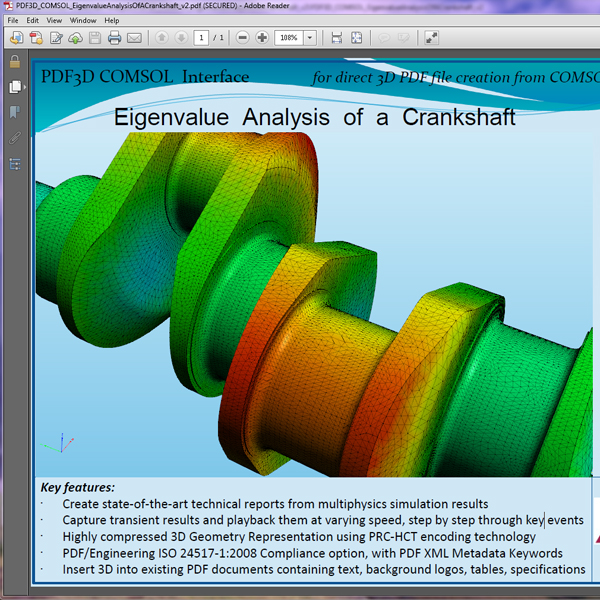 COMSOL® simulation software users are currently able to create screen shots and movie files that can be shared with others however, to get real 3D interaction in a report, the pathways to do this are rare, which is where PDF3D’s PV+ comes in.

“We’ve developed two main pathways for COMSOL Multiphysics® to enable 3D PDF Report generation,” explained Ian Curington of PDF3D, “the first of these uses a customized and extended version of ParaView which contains a COMSOL analysis software results format loader and a large library of 3D data visualization methods that creates 3D publishing directly, without needing any other intermediate software.”

PDF3D also offers a fast workflow from COMSOL non-displaced meshes showing analysis results. It works with the company’s immensely popular ReportGen software, which can also load COMSOL Multiphysics® analysis software result models and apply a colour contour to a surface mesh before generating a 3D PDF report at the touch of a button.

“Once the PDF is exported, it can be reviewed by anyone with the free Adobe Reader, without needing access to either PV+. This easy sharing of critical and complex data is the driving force behind all of our developments at PDF3D this year,” added Mr Curington.

You can see how easy it is to create an interactive 3D PDF report from COMSOL® using PDF3D’s PV+ in this tutorial.

COMSOL and COMSOL Multiphysics are registered trademarks of COMSOL AB.