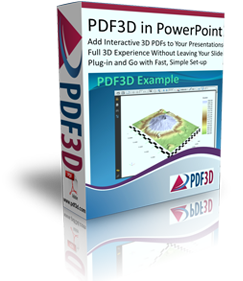 PDF3D, leaders in 3D PDF conversion, have released the latest update to their popular free PowerPoint plugin, which enables presenters to demonstrate interactive 3D visualization within live presentations at the click of a button.

PDF3D’s PowerPoint plugin is the only tool of its kind on the market and has been used by many who have enjoyed its ease of use and simplicity for a number of years.

The latest update to the plugin supports Windows 10, and Microsoft Office 2016, taking advantage of the latest platform configurations. The developers have also added a new functional feature which allows the presenter to embed PDF files inside a single PowerPoint file, making transport and archive much easier.

As experts in 3D PDF conversion and interaction, PDF3D’s developers have used this intelligence in the design of the plugin to allow the presenter, user and viewer to navigate the 3D image from every angle, giving them the ability to zoom, rotate and navigate through 3D designs, data, simulations and scan results to fully explore the image at the click of a mouse or pad.

“Typical PowerPoint presentations contain features that can’t be changed or manipulated during the presentation. Once behind the podium, the presenter is then slave to that prepared content, unable to play with it in a live setting. Limited pathways between PDF and PowerPoint has also restricted presenters in the past, forcing them to leave the slide deck, mid-presentation, to show the audience a 3D PDF in a separate window. It was clunky, awkward and disrupted the presentation flow – something our developers were keen to eliminate,” explained PDF3D’s Managing Director, Ian Curington.

An example of the PDF3D in PowerPoint plugin in use can be viewed in this recent example showcased by the University of Queensland: https://youtu.be/8jmrYbU2gZQ

New and existing users can download this latest plugin for free from www.pdf3d.com

PDF3D (www.pdf3d.com) produce a suite of widely respected software products and plugins for engineers, scientists and developers who need to communicate complex data and 3D models to others in the universally accessible PDF format. PDF3D’s technology provides the fastest and easiest-to-use, highly compressed 3D PDF conversion available for an ever-increasing range of formats and tools. From 3D CAD to GIS, DWG and LIDAR, PDF3D works closely with users and programmers within the engineering, geospatial, geology, aerospace, architecture, medical and product packaging communities worldwide.

PowerPoint, Windows and Office are registered trademarks of Microsoft Corporation.