From 2D Paper to 3D Digital

It was some time ago that designers moved away from 2D paper drawings to fully annotated 3D digital modeling using a variety of specifically developed CAD systems. Generating non-proprietary viewing facilities with PMI has been a very recent advance. Carrying along annotations, notes, markups and other non-geometric information is the key issue addressed by modern PMI implementations in interactive 3D PDF conversion systems. By presenting 3D parts and assemblies with associative interactive PMI visualization, significant time and cost savings throughout the design, planning and production processes of the supply chain can be achieved.

For the widespread practices of 3D digital modeling, the visual PMI representations are supported by industry standards such as ASME Y14.5-2009 symbology, with widely shared True Type Font (TTF) symbol sets. This ensures all who create and share PMI information use the same universal symbols and styles in their presentations, regardless of the original system. Without this standardization, significant costs and errors can occur through misinterpretation of data. In 3D PDF context, PMI text and symbols may be rasterized bitmap or fully
vectorized graphical representations.

The advantage of following standards is wide-spread free viewing platforms most notably the Adobe Reader viewing a standardized PMI representation.

presentations in 3D PDF. This enables re-use, search and a higher level of interaction. PMI maybe grouped and navigated according to view orientations, part hierarchy, layers or attribute. Fully associative interactive visual PMI may include highlight and hyperlink – where selected parts with annotations are switched to alternative highlight color or outline, and dynamic visibility of associated PMI is switched on. Part selection itself can be used to hyperlink to further documentation via bookmarks or even external URLs. The PDF3D-SDK exposes API methods for semantic PMI implementations for rich 3D PDF reporting features.

The pathways available in PDF3D software systems to create PMI in 3D PDF documents include:

The good news is that as 3D PDF becomes the preferred choice for engineers, designers and man

ufacturers to communicate their assemblies and product designs to a wider audience, there are now ways to present those models with the standardized PMI annotations.

With PDF3D’s latest suite developers can now create applications to embed 3D models into reports that conform to ASME Y14.5-2009 symbology. To find out more about 3D PDF Reporting for Manufacturers and Engineers, please take a look at the PDF3D-SDK development toolkit. Examples of 3D PDF files with PMI Annotation encoding are available on the sample Gallery page. 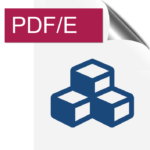 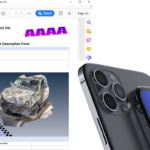 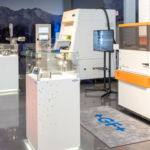