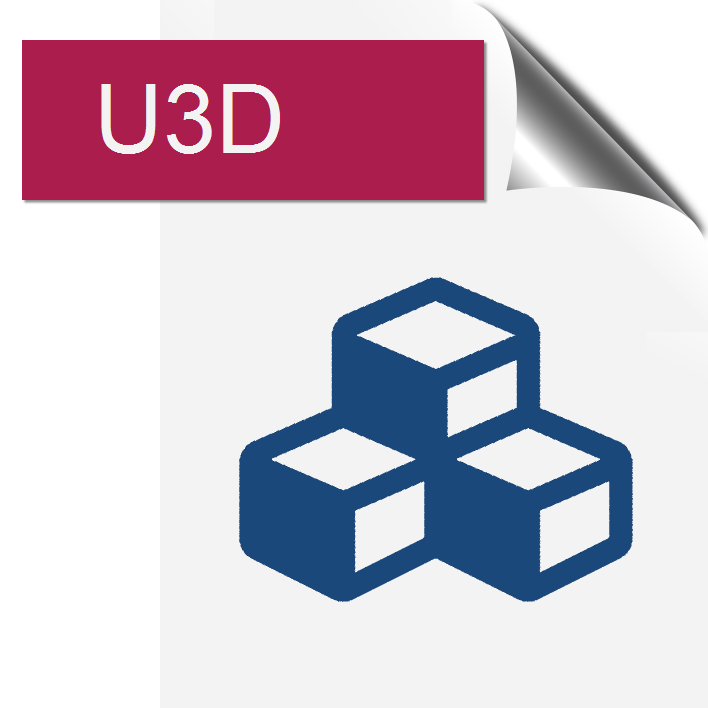 U3D is a 3D data structure and file format, one of two systems used in 3D PDF documents. Along side PRC, U3D is the historical foundation used to embed 3D interactive data and models into a PDF file. A PDF file containing U3D based 3D model can be viewed in using the Adobe Reader as well as other tools. As the U3D format has been available since 2006, many software systems support U3D export. U3D is also referenced in the ISO PDF/E standard.

U3D is a general 3D graphics format, primarily is best suited to triangle meshes, lines and points with hierarchical structure, color and texture. Attributes can be attached to 3D objects, as embedded metadata.

Although both U3D and PRC are available as 3D systems in a PDF, PRC is generally preferable in most cases, however there are some reasons to select U3D:

U3D can be used as a 3D file type for storage and interchange. Such 3D binary files can be interchanged with other U3D compatible applications. U3D files may be “wrapped” into a PDF file for display using the Adobe Reader by tools such as media9 and Acrobat Pro. Today, U3D is primarily used for 3D PDF internal encoding, rather than an interchange format.

U3D is described in four versions of published ECMA-363 reference specifications. Version 3 is the most commonly used type in industry software. The U3D format definition is not owned by any one commercial entity, although was established and submitted to ECMA by Adobe.

In addition, the U3D encoding scheme is part of the ISO specification PDF/Engineering ISO-24517 International Standard for how U3D plays a part of a PDF document under a strict subset for engineering archive purposes.

Vendor specific extensions to U3D are also supports – in particular the “Right Hemisphere” alternative compression technique which is currently supported by various vendors including PDF3D and Adobe.

History of the U3D File Format

Reproduced here courtesy of Robert Lansdale of Okino Computer Graphics, are his opinions and version of history and do not necessarily reflect the views of Visual Technology Services Ltd.

There has been much publicity about the U3D file format but little publicized history. Understanding where U3D fits into the global scope of other 3D file formats is best understood through its history. In the late 90’s Intel’s 3D Architecture Lab and a small group of developers created the “IFX Toolkit v1” and soon thereafter the “IFX Toolkit v2”. From the published papers of that time, and the structure of the IFX toolkit, it was mainly targeted at game developers who needed to deal with highly compressed, low polygon count mesh models, including skeletons and bones deformation. Technically, the IFX toolkit was and still is an excellent toolkit for 3D games development and for WEB streaming of 3D models. Portions of the IFX toolkit were sold through Digimation for a period of time as the Toon RT SDK and MultiRes SDK, among others. Some of the interesting aspects of the IFX Toolkit, which are still used today for U3D file support, is its “modifier pipeline” on each mesh object, and multi-resolution technology and deformation via skeletons.

In the summer of 2000 Intel and Macromedia announced that they would collaborate to bring the Intel 3D technology to the masses as an integrated component of the very popular Shockwave player. New content would be authored in 3D programs which first exported “Shockwave-3D .w3d” files, then the .w3d files which would then be turned into Shockwave playable files via staging and further re-export from Macromedia Director 8.5.

Almost every major 3D company bought into the idea of exporting their 3D content to the .w3d file format, for the desired purpose of streaming their 3D data quickly across the Internet to the large installed user base of Shockwave players. Considerable development effort, enthusiasm and marketing was invested in these custom Shockwave-3D exporters and related support software in each major 3D animation product.

However, just as quickly as the enthusiasm for the Shockwave-3D file format grew, it just as quickly petered out in 2001 and 2002. This coincided with the Internet Bubble implosion, as well as the general industry consensus that little “big money” could be made by WEB streaming of 3D asset data across the Internet. Many companies either went out of business, changed their directions or began to downplay 3D WEB streaming as their primary reason-to-be.

Not to let good technology go unused, Intel and several major vendors created the “CAD 3D Working Group” in July 2002, as part of the Web 3D Consortium, to create a technical standard that would let furniture designers, car manufacturers and other companies post their CAD drawings to the Web, as well as permit software developers to create standardized software browsers that will let customers read those images.

However, unspoken reasons caused Intel and a select number of companies to break free of the “CAD 3D Working Group” in October 2003 and create the new “3D Industry Forum”. Rather than base the desired universal 3D format on the more extensive and well defined Web 3D Consortium’s X3D file format, it was instead based on the Intel IFX v2.0 toolkit and its native 3D file format (previously utilized as the Shockwave .w3d format). This would become the now-known “U3D” file format. Intel open sourced the IFX v2 toolkit and allowed it to become the SDK for software developers to create U3D importers and exporters.

The open and documented U3D file specification was approved by the The Ecma General Assembly on January 7th 2005 as the 1st Edition of the Ecma International standard (ECMA-363). Thus, U3D became a Ecma standardized file format. The current primary use of the U3D file format is as a means to embed 3D data files in Adobe PDF files, although it would have been so much easier in the long run to use other existing and well established 3D file formats such as VRML2, Wavefront OBJ, XGL, and so on.

Visual Technology Services announced and launched PDF3D-SDK in September 2006, based on the ECMA-363 publications. Over successive years, porting, restructuring and optimisations have been applied to our implementation to bring it to commercial standard, with professional support. Meanwhile, the Intel sample implementation has remained static since early 2007.

The “3D Industry Forum” has also lapsed and is no longer active. A new industry body has been formed in 2011 called the “3D PDF Consortium“, which promotes general use of 3D PDF, including U3D, although promotion specifically of U3D does not appear a priority for the organisation, with rather more emphasis on PRC.

For long-term stability and recognition of wide-spread use of U3D, the PDF/E standard allows U3D to be used for engineering archive activities.