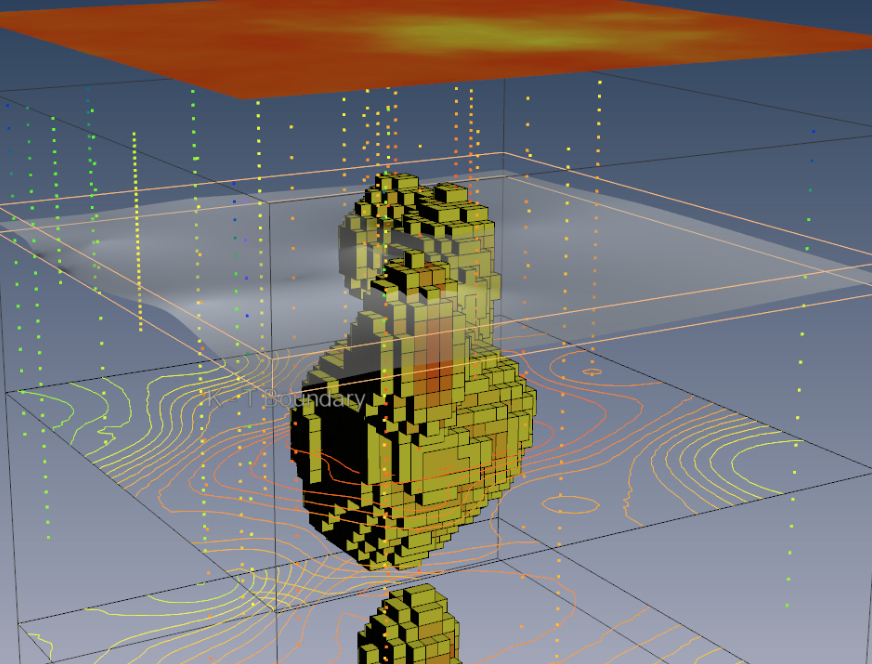 The dense metallic element Iridium is found in meteorites with much higher abundance than on Earth. This is the basis for the theory that the unusually high abundance of iridium in the clay layer at the geologic sedimentary Cretaceous-Tertiary (KT-Boundary) layer may have been caused by a massive meteorite impact, and been the primary cause of Dinosaur mass-extinction 66 million years ago. This is often called the “Iridium Anomaly”. Much of the evidence for this theory is in surveys of the Chicxulub impact crater in Yucatan, Mexico.

The 3D model presentation of an Iridium geobody shows volume cells having a greater than average concentration of Iridium, while context is aided by showing a subsurface horizon at the KT-Boundary and the current earth surface terrain.

This model data is supplied as part of Golden Software’s VOXLER 3D visualization application. By using VOXLER to set up a representative view, threshold the Iridium Geobody data, merge 2D and 3D grid data and create contour sections, a composite 3D view is created. Then by exporting and converting to interactive 3D PDF using PDF3D ReportGen application, a portable format PDF page of half megabyte can be emailed and viewed. For more about this process, see additional article: “VOXLER Users Can Now Take Advantage of 3D PDF“.

There has been a great deal written on this subject, and much scientific research activity. This case study is using this subject matter as the topic simply to show the viability of publishing VOXLER models into 3D PDF format. 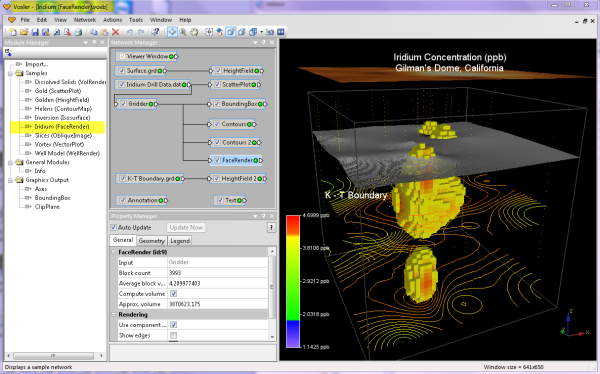 The case study image shown here is using VOXLER version 3, where one of the packaged supplied visualization pipeline networks “Iridium (FaceRender)” is based on wellbore data from Gilman’s Dome, California, of Iridium concentration in the general range of 4 parts per billion. The network performs the data processing steps of gridding, contouring and cell thresholding. An .iv file of the visualization is passed to PDF3D ReportGen for the 3D PDF generation step.

VOXLER is a product and trademark of Golden Software LLC.